This is a simple spool rack used for warping.

There was some cursing, I’ll admit. While I grew up assisting with all things weaving, including warping a loom, I had never attempted it without supervision.

Well, that is exactly what Bill and I did a few weekends back. Luckily, the camera was handy to document our attempt (perhaps folly is a better word). We borrowed the warp stand and tension box from my mom, put on some Sherlock, and hoped the dogs would be lazy and show zero interest in our doings.

The spool rack is a simple rack that holds the warp thread in the order you want. We have an older Union loom that has holes for small dowels or large nails along the bottom bar below that back beam. You don’t need a spool rack if your loom is set up to hold the warp thread on the bottom bar. However, my mom assures me that the rack is a better choice and eliminates the risk of bonking ankles into nails. See, less cussing.

So, the center bar can be lifted, pivoting the metal crossbars out so that the thread can be loaded. You’ll see that I have two larger spools at the top. I on purposely left a blank place in between those large spools and the next spool; this reduces the chance of tangling the warp as it is pulled off the spools and onto the back beam of the loom. Also, I chose a distinctive thread to start the warp. This makes it easy later on to capture the 20 threads that belong in each section while tying on.

I chose some strong colors for this particular warp. I had a mix of shag rugs and sock rugs to weave. On the shag, the warp, no matter what you pick, will not affect the color of the rug too much. Now, on the sock rugs, the warp can make a difference. So, I had a few things in mind: 1) I had an orange, yellow, and red sock rug to weave up; 2) Tis the season for bright colors (summer); 3) Northern NM is a fire, like forest fires, and this influenced my color selection. The previous warp had been a nearly all black warp, so you could say I was lightening things up a bit. When I get around to weaving cottons or blue jeans, I will probably put on a lighter warp – lots of natural off-whites, beiges, light yellows, etc. with the occasional vibrant thread.

From the warping stand, the threads go through a tension box.

With the spool rack loaded, we threaded through the tension box, which clamps to the back of the loom. First, through the little holes, making sure that as your threads pull off the warping stand they are not tangling or crossing over one another. Then under and over the thick dowels towards the back beam. Tie onto a peg and you are ready to start winding on. Now, this is a two person job. Some looms have a handle specially made for just this task. We had a wrench and duct tape. I also took a bit of very bright yellow thread and tied it to the peg nearest me to assist in counting. Bill had the first shift of making sure the warp went on even and changing out spools as they ran out.

We had decided to put on 75 turns on my 18 inch diameter beam. Basically, this will give me perhaps 20 rugs on this warp. The back beam on this loom can accommodate 140-150 turns, which would be twice the number of rugs.  But this also requires twice as much warp and I didn’t have that available in the colors I had chosen. We were also going from a 32 inch wide warp (the old black warp) down to a 28 inch wide warp. Each section is 2 inches wide in warp, so we simply dropped 1 section off either end.

I counted as I cranked, starting off slowly. Bill watched the warp go on, gently adjusting it with his fingers as needed. His job also required that he pay attention to the pegs on either side of the section, making sure none of the threads got caught on the pegs, or skipped over to a neighboring section. Basically, you want the warp to evenly take up the entirety of the section. You don’t want it to build up on one side or the other, creating a ditch. This leads to uneven tension later on. Once I got to 75 turns, I added 1 more just to be sure. We then cut off, and tied onto a peg and tucked in the ends.

We both kept eyes on the spools. As one was nearing its end, I would slow down my turns. Having to dig the tail-end of the thread out of warp because you missed it 2 turns back is a pain. Luckily, this is one mistake we didn’t make this time. Also, sometimes spools can suddenly lock and you might break the thread. Again, we avoided this error. Don’t worry, we made plenty later on with the tying on. Anyway, the thread coming off the spool can get tangled on the metal dowel it rests on. Sometimes, towards the end of a spool, the end of the thread will be tucked in to the wound thread and get tangled on the thread coming off the spool, causing it to lock. 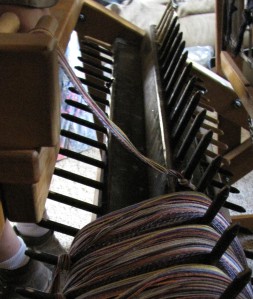 The same number of turns (hopefully) go onto each section.

Once a section is done, you simply loosen the clamp of the tension box and scoot it down a little and reclamp. Eventually, you will have to move the warp stand down too, but this usually is only necessary 1-2 times on a little loom like mine. We swapped about halfway through, as either activity can mess with your back. We were both rusty. Bill kept forgetting to count and I kept pushing the threads over too far, causing them to skip out of their section. In Bill’s case, we simply put warp on until it looked even with nearby sections that we did do a count on. On my mistake, I would have to ask Bill to stop turning and then retrieve the errant threads going back to where they jumped, put them in the correct section, and pull those few threads taught back to the tension box.

Finally, we completely ran out of 1 color on the last section. We were perhaps 2/3 of the way done with this section, so we substituted the closest match we had. It happened to be a black for a deep burgundy. This won’t be particularly noticeable woven up and just nosy expert weavers and you all will know about. With the supplies put away, we were now ready to tie on, which I will go into in another post.

2 thoughts on “Warping the Loom”